Today I will talk about the Japanese creation story. This myth can change depending on various sources and so can be moulded to fit various sects of the Shinto faith.

Before you begin reading, I feel it is important to state that this is very heavily referenced from the internet. However, I felt this is an important part of Shinto that we should at least have a basic understanding of.

The Creation of the Universe

The beginning of the Universe was a shapeless and silent kind of matter. Later, sounds indicated the movement of particles. With this movement, the light and the lightest particles rose, but the particles were not as fast as the light and could not go any higher. The light became the top of the Universe, and below it the lightest particles created the first clouds and then heaven – which was called Takamagahara (高天原, “High Plain of Heaven”). The remaining particles that had not risen formed a huge mass, to be called Earth.

These five kami were known as Kotomatsukami (別天津神, literally means “distinguishing heavenly kami”) and appeared spontaneosly. They were genderless and did not have a partner. After their emergence from the mass of the Universe, they went into hiding.

After these kami had gone into hiding, two other kami emerged. These were Kuni-no-toko-tachi-no-kami (国之常立神) and Toyo-kumo-no-no-kami (豊雲野神). These kami also emerged spontaneously, were genderless and had no partner. Like their predecessors, they hid at birth.

Then, five pairs of kami were born, each pair consisting of a male and female.

All these kami are collectively known as Kamiyonanayo (神世七代, “Seven Divine Generations”).

Following the creation of heaven and Earth and the birth of these primordial kami, Izanagi and Izanami went on to create what we now know as Japan (Kuniumi), and gave birth to a large amount of kami (Kamiumi).

The Creation of Japan

The kojiki describes the creation of Japan. In this, Izanagi-no-Mikoto and Izanami-no-Mikoto were told by the myriad of other kami to create a new land which would become Japan. They were given a spear which they used to stir the primordial waters. When they lifted the spear, an island was created from the water dripping from the end.

They lived together on this island, creating a palace which housed a large pole. Whenever they wished to bear offspring, they performed a ritual around this pole. This ritual involved them circling the pole, with Izanami (the female) greeting Izanagi (the male) first. The first two children (islands) which they created turned out badly and they decided to cast them out. They believed that this was because they had performed the ritual incorrectly.

They tried the ritual again, with Izanagi speaking first. This worked and they then gave birth to the eight islands which make up the Japanese archipelago. Following this, Izanami gives birth to a myriad of other kami but unfortunately dies due to complications giving birth to the kami of fire (Kagu-tsuchi).

Izanagi tries to revive his dead wife, not truly understanding the laws of life and death. Izanami descends into Yomi-no-kumi, the netherworld, where Izanagi chases her. Once he sees the dead figure of his wife decayed and crawling with maggots, he flees in horror.

The First Emperor of Japan 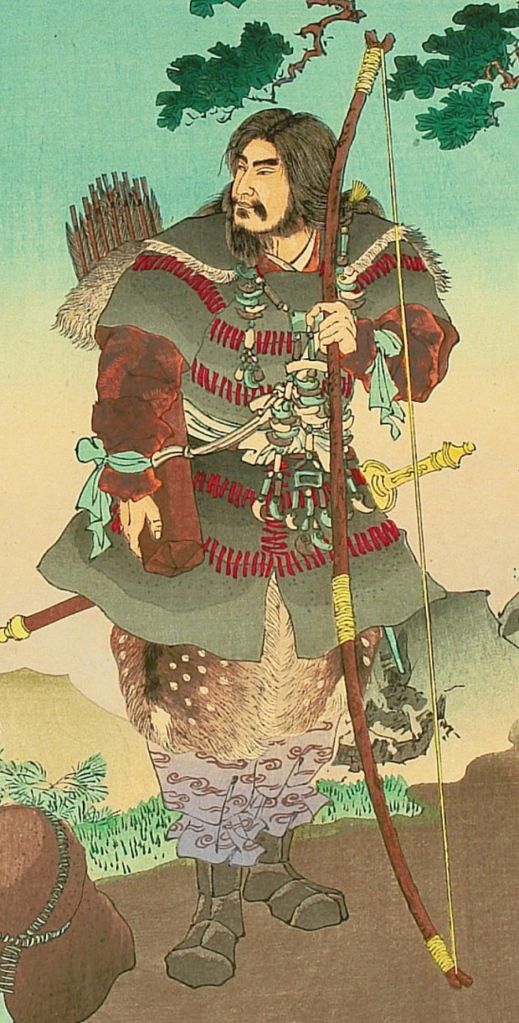 A few years go on and Japan is at war with itself. The Sun Goddess Amaterasu-Omikami sends down Ninigi-no-Mikoto – her grandson, to plant rice. He then went on to become the great-grandfather of the first Emperor of Japan, Emperor Jimmu. He also brought down the three celestial gifts used by the emperor: the sword Kusanagi, the mirror Yata-no-kagami and the jewel Yasakani-no-magatama. These three gifts were to signify that the Emperor of Japan is a descent of Amaterasu-Omikami herself. This account appears in the Nihon Shoki.